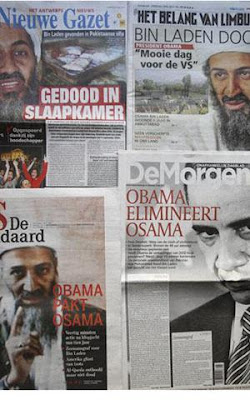 Photo: ASSOCIATED PRESS
A composite of Belgian front pages shows Osama Bin Laden and U.S. President Barack Obama on Tuesday, May 3, 2011. Headlines read clockwise from bottom left, 'Obama nabs Osama', 'Killed in his bedroom', 'Bin Laden is dead, a beautiful day for the United States', and Obama eliminates Osama'.
“We have always maintained a clear position, which is to absolutely fight against terrorism..."
Osama Bin Laden is dead but regional threats remain from al-Qaeda affiliates, Cambodian officials said Tuesday, as they reaffirmed a hard stance against terrorism.
“The royal government’s stance has not changed,” said Koy Kuong, a spokesman for the Ministry of Foreign Affairs. “We have always maintained a clear position, which is to absolutely fight against terrorism, because terrorism is a deed which the international community, as well and the world, punishes and condemns.”
Cambodia has anti-terrorism laws and an counter-terrorism unit. It has also seen a number of local plots disrupted over the past decade, after officials learned the leader of Jemaah Islamiyah, a terrorist group, had found haven here in 2003.
Lao Monghay, a former researcher for the Asian Human Rights Commission, said Tuesday angered Bin Laden loyalists could now pose a threat to Western nations or their representatives.
However, police officials said Tuesday they had bolstered security in case of retaliatory attacks against the US or other nations, following the shooting of Osama Bin Laden by US forces in Pakistan Monday.
“Crushing their terrorist leader is an issue,” Keat Chantharith, a spokesman for the national police, said. “But safety for Cambodian people is the most important.”
Posted by CAAI News Media at 3:56 pm