Residents uneasy as clashes go on 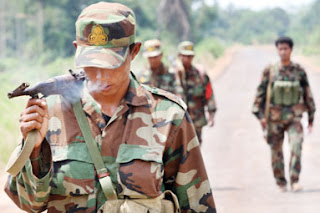 Photo by: Sovan Philong
Cambodian soldiers walk down a road in Oddar Meanchey province’s Banteay Ampil district toward the front-line on the border yesterday.
http://www.phnompenhpost.com/


Wednesday, 04 May 2011 15:02May Titthara and Cheang Sokha
Oddar Meanchey province
Villagers in Oddar Meanchey province who fled their homes following the outbreak of fighting along the Thai-Cambodian border continued making their way home by the thousands yesterday, despite clashes in the area that continued for a 12th straight day.
The Ministry of Defence said in a statement yesterday that fighting broke out on Monday evening and continued into yesterday morning, with the two sides exchanging small arms and artillery fire. More than 30 shells reportedly landed in the vicinity of Ta Krabey temple, which, along with Ta Moan temple, sits along the undemarcated border and has been a flashpoint for hostilities since they first broke out last month.
The most recent clash followed a pattern that has emerged since a ceasefire was first brokered at the border last week, with the two sides meeting to reaffirm the peace agreement only to see it broken in the evening.
Chhin Chanpor, commander of the Cambodian forces stationed at Ta Moan and Ta Krabey, which are roughly 10 kilometres apart, said yesterday that officials from the respective sides had met again yesterday to reestablish the ceasefire.
One Thai soldier died in the most recent clashes and three were wounded, Thai army spokesman Sansern Kaewkamnerd said. No Cambodian casualties were reported. The death toll for the Oddar Meanchey battles now stands at 18, including nine Cambodian soldiers.
The Defence Ministry said Thailand had broken the ceasefire on Monday night, while Thai government spokesman Panitan Wattanayagorn claimed that it had been Cambodia.
“We honour the ceasefire as agreed from the beginning, and we call upon Cambodia to comply or to agree with the ceasefire that has been already discussed,” Panitan said.
Prime Minister Hun Sen announced last week that he planned to raise the dispute at the upcoming summit of the Association of Southeast Asian Nations, set to begin in Jakarta on Saturday. Thai Deputy Prime Minister Suthep Thaugsuban reportedly expressed cautious optimism about the meetings, telling The Bangkok Post yesterday that talks in Indonesia between Hun Sen and Thai Premier Abhisit Vejjajiva “should produce positive results”.
Speaking yesterday at a ceremony in Phnom Penh, Hun Sen ordered the Cambodian Mine Action Centre to clear unexploded ordnance from the Thai military’s shelling of Oddar Meanchey province. CMAC director general Heng Ratana said nearly 100 clearance personnel had been dispatched to Oddar Meanchey, adding that they had yet to find evidence of the cluster munitions that Thai forces deployed during fighting near Preah Vihear temple in February.
Meanwhile, thousands of Cambodian villagers have begun venturing back to their homes after fleeing when clashes broke out last month.
Kao Roem, from Samroang district’s O’Smach commune, said yesterday that he had lived for seven days at a relief site set up at Krous pagoda in Samroang town. Sitting in a car in Samroang on his way back to his village, he said he was anxious to get home but worried that Thai troops would break the ceasefire.
“If they fire again, I will not come back to the relief site,” he said. “I will let my wife and children go back and I will take up a gun and exchange fire.”
Standing at her home in Banteay Ampil district’s Kokmon commune, 51-year-old Pha Ny said she and her five children had already returned back to their homes from the relief sites once before fleeing again in the face of Thai artillery. “I am ready to leave again if the situation turns bad,” she said.
Of the 45,000 Cambodians who had fled their homes near the border for relief sites since last month, more than 35,000 had returned as of yesterday, according to the Cambodian Red Cross. Uy Sam Ath, director of the disaster management department at the CRC, said officials were still prepared to provide support to those who have fled their villages, adding that the government was in the process of constructing a nine-hectare evacuation site in Oddar Meanchey’s Chongkal district.
Thai spokesman Panitan said 40,000 Thai villagers had been evacuated during the fighting, and that Thai officials were evaluating whether it was safe for them to return to their homes.
Oddar Meanchey provincial governor Pich Sokhin said 38 homes in the province had been damaged by Thai artillery since the fighting began, with seven completely destroyed.
One of those was in Banteay Ampil district’s Kokmon commune, Romchek village. There, 51-year-old Dum Cheuy surveyed the remnants of his home, which he said had been destroyed by Thai mortar shells on April 25.
While his wife and children fled to a camp in Samroang town, Dum Cheuy said he had stayed put in the village, and had been hiding in a neighbour’s bunker when the shell hit his home.
“I saw black smoke and fire, and I guessed someone else’s home had been hit,” he said. “I didn’t think it was mine.”
CHEANG SOKHA REPORTED FROM PHNOM PENH; ADDITIONAL REPORTING BY REUTERS AND JAMES O’TOOLE IN PHNOM PENH
Posted by CAAI News Media at 12:20 am