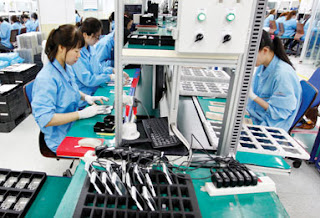 Employees of Pantech, a South Korean mobile handset maker, work on an assembly line at a factory in the city of Gimpo last month. Reuters
http://www.phnompenhpost.com/


Thursday, 05 May 2011 15:01May Kunmakara
THE number of Cambodian migrant workers travelling to South Korea tripled in the first quarter year-over-year, officials said yesterday, though adding concerns with workers overstaying contracts mean the trend may not continue into next year.
A rebounding South Korean economy and a rejection of illegal workers helped to boost the Kingdom’s presence on the East Asian peninsula, though the ending of many Cambodians’ contracts in October could affect the number of new workers being sent there in 2012, officials said.
According to Heng Sour, chief of the Ministry of Labour and Vocational Training’s overseas manpower unit, Cambodia sent 1,475 workers to South Korea, about 86 percent of which were men, working largely in the industrial and construction industries. The remaining 200 workers were women, employed mostly in the agriculture sector.
“The Korean economy is getting much better, so they require more and more labourers from abroad,” he said.
South Korea’s policy against illegal workers also contributed to the rise, Heng Sour added.
The South Korean government has signed Memorandums of Understanding with 15 Asian countries, including Cambodia, to bring workers to the country. However, the number of workers from a particular MoU partner is reduced if migrants are employed illegally beyond their original contracts. Those numbers are then replaced by workers from other countries.
Heng Sour said that last quarter that there was a jump in illegal workers from Bangladesh, Pakistan, Nepal and Sri Lanka, opening the door for Cambodia to fill the gap.
But now he is worried that the Kingdom may encounter the same problem when many of its workers who left for South Korea in 2008 see their contracts expire.
“If they don’t come back, they will become illegal workers,” he said. “So, we will face a shortfall in 2012.”
Heng Sour called on Cambodians presently in South Korea to return to the Kingdom when their contracts were done, saying it would help the country by giving others here the chance to work abroad. Also, returning workers would have the opportunity to apply to go again.
“We appeal to their parents and local authorities to cooperate with us in urging them to come back,” he said. “When they are back, it does not mean they don’t have the chance to work in Korea again.”
He also noted that returning workers can receive up to US$4,000 paid back that they had paid toward insurance while in South Korea.
Cambodian workers initially sign a one-year contract but can receive a second two-year contract based on performance. If performance warrants, a final two-year contract is then awarded, before workers must return home to Cambodia.
Posted by CAAI News Media at 11:04 pm