Investors stock up on gold 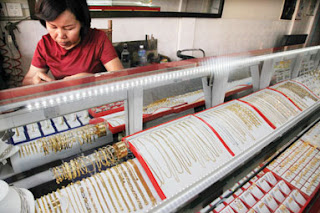 A woman works at a gold shop in Phnom Penh earlier this week. Gold has been setting record highs on international markets. Photo by: Heng Chivoan
http://www.phnompenhpost.com/


via CAAI
Thursday, 05 May 2011 15:01Sieam Bunthy
CAMBODIA’S largest gold vendors claimed continued growth in prices has led prospective investors to increase their holdings of the precious metal, in the hopes that prices will continue to rise.
Ly Hour Gold and Exchange Store owner Sieng Lim said her business had increased in recent weeks with the sustained rally in gold.
“[Ly Hour’s] sales are on the rise because customers think gold prices will increase in the future,” she said. “They buy gold because when prices continue to increase, they can sell it for a profit.”
Before Khmer New Year in April, one damlung, or 1.2 troy ounces of gold, sold at $1730, while it was selling at $1860 per damlung earlier this week at Ly Hour, she said yesterday.
In March, Sieng Lim had told The Post that sales were declining, with prices at the time around $1705 a damlung keeping away buyers.
Ministry of Commerce statistics show gold has increased about 10 percent on local markets so far this year, as international prices for the precious metal have set record highs north of US$1500 per troy ounce this week. Gold closed at $1,533.28 on the Singapore exchange yesterday.
Virin Ratanak Gold Shop owner Virin Ratanak echoed Sieng Lim’s claims that customers had increased purchases, even as gold had become more expensive in recent weeks.
“Although gold is more expensive than before, buyers are increasing more than before,” she said.
However, smaller vendors of the precious metal claimed to be less enthusiastic about higher prices.
Ny Vet, a gold seller at Samaki market, said that the recent increase had required more capital for her to purchase gold, though her margins did not increase.
“The growth of gold prices is not good for sellers,” she said.
A gold vendor at Stung Meanchey market, who declined to provide his name, said that gold sales were decreasing every year as prices continued to rise. His stall sells mainly to factory workers, who no longer have the money required to buy gold at higher prices, he said.
Posted by CAAI News Media at 10:51 pm