Press 'not free' in Kingdom 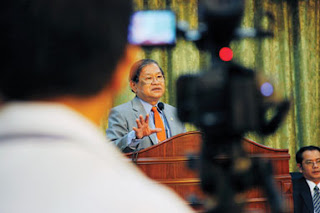 Photo by: Heng Chivoan
Information Minister Khieu Kanharith speaks in Phnom Penh yesterday at an event to mark World Press Freedom Day. Press freedom has become worse in the Kingdom, according to a US watchdog.
http://www.phnompenhpost.com/


via CAAI
Wednesday, 04 May 2011 15:01Mary Kozlovski and Kim Yuthana
The targeting of Cambodian journalists through defamation and disinformation legislation and the closure of an opposition newspaper were responsible for a decline in the Kingdom’s world ranking for press freedom last year, according to a report released yesterday.
According to the Freedom of the Press 2011 report, released by United States-based watchdog organisation Freedom House in conjunction with World Press Freedom Day, Cambodia’s press freedom ranking plunged to 141 for 2010 out of 196 countries and territories rated, compared with a ranking of 134 for 2009.
The report described Cambodia as “not free” and declared that the number of people worldwide with access to free and independent media had dropped to its lowest level in over a decade.
Cambodia’s ranking also declined within the Asia-Pacific region to 30 in 2010 out of 40 countries and territories, compared with a ranking of 29 in 2009. “Cambodia’s score ... deteriorated due to an aggressive use of disinformation and defamation legislation against journalists, as well as a reduction in media diversity following the closure of an opposition newspaper,” the report said.
Opposition newspaper Khmer Machas Srok relaunched in March after closing down in June 2010 due to funding shortages and illness suffered by its publisher, Heng Chakra. Heng Chakra was jailed for disinformation in 2009 for articles published in Khmer Machas Srok which alleged that officials working for Deputy Prime Minister Sok An had been involved in corruption. He received a royal pardon in April last year.
Moeun Chhean Narridh, director of the Cambodia Institute for Media Studies, said yesterday that defamation and disinformation legislation had been used by some government officials to deliberately prosecute journalists.
“It constitutes political harassment,” he said. “The government needs to remove the criminal provision from [defamation and disinformation] law.”
Moeun Chhean Narridh added that the government must adopt a draft law on freedom of information.
“We need a legal framework that guarantees access to information,” he said.
Minister of Information Khieu Kanharith told The Post in December that a draft policy paper on freedom of information finalised by the government in 2007 – which would serve as a framework for a draft law – was at the Ministry of National Assembly-Senate Relations and Inspection.
Khieu Kanharith could not be reached for comment last night, but said at a World Press Freedom Day event in Phnom Penh yesterday that the government encouraged the delivery of information to the public through different forms of media.
According to a report released at the event by the Cambodian Association for the Protection of Journalists, a number of cases had been brought against journalists for defamation and disinformation over the past year but no journalists had been charged, imprisoned or killed.
Posted by CAAI News Media at 12:18 am